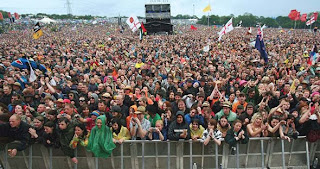 With only 2 months to go until the 40th Anniversary Glastonbury Festival, the line-up has been officially released. With musical legends such as U2, Muse and Stevie Wonder set to play on the Pyramid Stage, this epic festival promises to deliver on it fortieth birthday.
Tickets went on sale on October 4th 2009 and were sold out within 24 hours, proving that Glastonbury is one of the biggest and most popular festivals to attend. However, Glastonbury had some rivalry with line-ups from the well established festival T in the Park. The line-up for T in the Park was announced before that of Glastonbury’s and included some impressive acts such as Jay-Z and Eminem. For some time fans were sceptical as to weather Glastonbury could match the remarkable line-up of T in the Park, however a couple of months later they responded with a line-up to be jealous of, promising 4 days of captivating musical acts that everyone would be delighted to see.
So as fans count down the weeks till the big weekend, Glastonbury organizers are working hard to give the estimated 140,000 festival-goers a weekend of musical heaven they wont forget.
Posted by Music in Media at 04:07