Gibson Dusk Tiger - Another Attempt at a Super Guitar 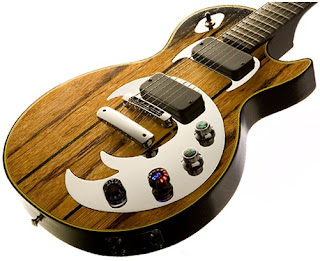 Gibson’s most recent musical contraption is the rather attractive-looking Dusk Tiger. The most obvious design feature is the stunning marblewood top and chrome tailpiece which fits around the pickup and snakes around the bridge; giving it a flowing display and some of the untamed character suggested in its name. The appearance of this guitar may not be to everyones taste but personally i think these features give it distinct persona that no other guitar i have seen holds.
Unfortunately for many people hoping to experience this guitar, it comes with a costly price tag of £2,799 and is limited to a reserved 1000 production line, the Dusk Tiger will be an instrument available to only a minority of guitarists.
The Dusk Tiger inherits the same Robot technology as Gibson’s last attempt at a super guitar – the Dark Fire. This means it acquires the redesigned Master Control Knob, the MCK II, which, when activated, allows you to access a range of 11 tunings. Although apparently it’s much quicker and more precise than the one on the Dark Fire, it still fails to achieve 100% accuracy on all tunings.
A neat feature on the Dusk Tiger is that you have multi-function toggle switch which allows you not only to change between the magnetic pick-ups, but also has a blend function which means you can embrace the perfect ratio of magnetic to piezo tone in the guitars output.
If your one of the lucky few who will be getting a Dusk Tiger, it also comes with Gibson’s edition of Ableton Live 8 and a Robot Interface Pack (RIP) which is everything you need to connect your Dusk Tiger to your Windows or Mac and record your ideas , it will also give you access to hundreds of effects and amplifiers and the ability to create backing tracks.
The initial signs from Gibson look positive on their 4th attempt of a super guitar, however, when it comes to using the Dusk Tiger for heavy gigging and long hours in the studio will it perform to the high standard we all expect from one of the most famous guitar makes in the world?
Posted by Music in Media at 14:21